Mountain Wilderness International’s goal is to change, among mountain practitioners, the perception of nature and the way to behave in the mountain. This action keepsv on regularly in the effort to educate those who frequent the mountains to the fragility of the environment in which they operate and to the need to adopt behaviors that do not endanger it.

In France, the association is regularly present at the major festivals dealing with mountain. On October 1st, 2011, its members held a stand at the Pyrénicimes Festival, in Toulouse. From October 5 to 8, they were at the sport and nature conference Euro’Meet, in Annecy, before ending up, on November 11 in Nice, for the Explorimages festival. On this last occasion, the film Vertical Sailing Greenland, of Nicolas and Olivier Favresse and Sean Villanueva, from MW Belgium, has shown that it is possbile to practice mountain while maintaining strict ethical standards. 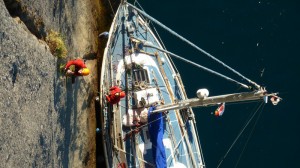 In Switzerland, a nature tour, organized by MW Switzerland in Puschlav Saoseo, between 16 and 19 October, brought together the mountain lovers to put into practice the ideas of the movement.

And the international movement prepares, for the summer of 2012, an expedition into the North-European wilderness, intended to show that high technology is not essential while frequenting the mountains and that it is even a barrier preventing contact with nature. This trek, planned on a two week basis, will involve a group of 10 to 15 people, without the aid of compass, GPS, watch or any kind of techical device.