Although the only mountains in Spain including glaciers are the Pyrenees, so we may say that there are no high mountains in the rest of the territory in that sense, there are mountains all along the country. Many of them have a great interest in many aspects, ecological, economical, sportive, etc. And of course they are very appreciated by the Spanish mountaineers. This is the case of some segments of the Cantabrian range, being one of them the mountains contained in the Natural Park of Fuentes Carrionas and Fuente Cobre-Montaña Palentina. The pass of San Glorio is a central node of this area, giving name to its surroundings. 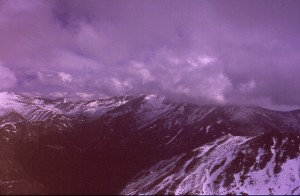 The absence of real high mountains in most of the Spanish regions makes difficult an easy exploitation of the snow business. However, it does not discourage some social and economical agents of doing some attempts, creating a strong pressure over valuable mountain areas for many reasons, but with just a fair potential for ski.

The case of San Glorio is one of the most prominent conflicts in the last years. In 2003 a project for a ski resort in San Glorio was presented. The rules of the Natural Park did not allow such installations, but the regional government welcame the project. A social controversy was initiated, and still persists. Some people opposing the project founded the Platform in Defense of San Glorio, that has been holding a struggle on this for many years.

The regional parliament revoked the rules of the park to allow the construction of the ski resort. The Platform in Defense of San Glorio started some legal actions to stop the process, that contravened the national laws for protected areas. As it is written in the Wikipedia article, “In March 2008, the High Court of Castilla y León ruled that the regional government’s sudden change in its own planning regulations, solely with the intention of permitting a ski resort, not only went against its own regional law, but both the national law on nature conservation and the European Natura 2000 regulations.”.

The regional government did not abandon its objectives. It presented three allegations against the above-mentioned sentence. But the national Supreme Court discarded the three allegations, leaving little margin to new attempts of overcoming the legal problems.

In spite of the last sentence, the regional government has revived the project giving it status of law, with the excuse of general interest for the population in the area. Once more this way of acting finds the opposition of the Platform, that emphasizes the strange paradox of proposing such ruinous investment in the framework of the current economical crisis.

The determination of the regional government, in good tuning with the project proponents, makes us to be afraid that these beautiful mountains, well appreciated by the mountaineers that know them, are not out of the danger of suffering the project. Their numerous environmental values, including to be refuge for the eastern nucleus of Cantabrian bears, might not be sufficient arguments to save them of it, even having a protection figure, when the pressure of the snow and real estate lobby is too strong.