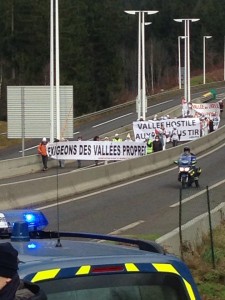 According to French police and activists, between forty and sixty “white caps” have blocked access to the Mont-Blanc tunnel for more than an hour late Saturday, December 6 to protest against pollution of their valley caused by road traffic,.

“We demand the return of the pollution tax (a French environmental tax) and Euro vignette installation in all sensitive areas,” said Simon Métral, president of the Association for the respect of the Mont-Blanc Site (ARSMB).

“Everywhere we are told that we are right, that our struggle is legitimate but in the end  nothing gets done. So we made a punch operation called « the white caps of Mont-Blanc », “said Mr. Métral.

“We have a consensus for years but consensus does not pay off,” he added.

The police confirmed that access to the tunnel linking France and Italy was blocked in both directions between 1:45 and 3:00 pm. ET, also stating that the protest disbanded without incident.

In 2013, the Arve valley, which leads to the Mont-Blanc tunnel, experienced 58 days of particles pollution, according to Air Rhone-Alpes institute, while the European regulatory limit is 35 days per year.

In late November, the elected representatives of the Chamonix valley had adopted a motion requesting the temporary ban of the most polluting truck traffic roaming in the Arve valley “starting the morning of the second day following a characterized pollution occurrence. ”

The ARSMB and Mountain Wilderness are members of proMONT-BLANC an umbrella organization for the protection of Mont-Blanc.

Mountain Wilderness supports the ARSMB in its effort for better health conditions in the Arve and Chamonix valleys.