Since its independence, in 1821, Guatemala claims sovereignty over the south part of what was then the British Honduras, now Belize. Since then, no agreement has been reached on the delimitation of the borders between the two countries. This situation is at the roots of the illegal intrusions of Guatemalans in Belize, threatening the Belizean environment, especially in protected areas.

Roughly 26 percent of Belize’s area is protected as national park, forest reserve or private reserve, in a total of 96 protected areas.

The main threats identified range from agricultural activities, fires, illegal logging, wild life depletion, looting of cultural artefacts to vandalism. They are caused by illegal incursions by Guatemalan villagers, commonly referred to as “xateros”. According to Néstor Méndez, Belize’s ambassador to the United States: “Our national parks are under siege, some of the most pristine forests in Central America are being logged out, while exotic birds are being extracted – mostly by Guatemalan settlers who cross the border illegally.”

The main way for Guatemalans’ intrusions in Belize is the Chiquibul National Park.

Chiquibul National Park, Belize‘s largest National Park, lies in the Maya Mountains which culminate at Doyle’s Delight, the highest point in Belize (1,124 m above sea level). It encompasses an area of 1,073 km2, one-seventh of Belize’s territory.

The park was established in 1991 on the parts of the Chiquibul Forest Reserve where they were no logging concession. The area of the National Park was about three quarter of the area of the forest Reserve. In 1995, the Mayan Archaeological site of Caracol has been into the National Park. The Park belongs to the category II of the International Union for Conservation of Nature (IUCN).

The main part of the Chiquibul Cave System, the longest known cave system in Central America, lies in the National Park. This cave system is composed by three major caverns, the lengths of which are 14 km, 13 km and 5 km. The total length of the system is 55 km. Here can be found the largest cave room in the Western Hemisphere and the fourth largest in the world.

The National Park is invaded by Guatemalans, which clear plots for farming, trap wildlife for sale, dig gold placers and log tropical wood. Some incursions go as far as 45 kilometres inside Belizean territory. 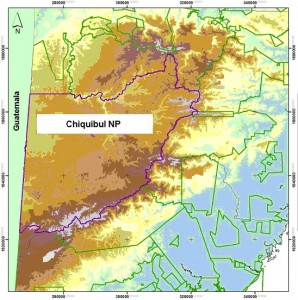 According to Roni Martinez, conservation officer at the Blancaneaux Lodge and a member of the Belize Raptor Research Institute, “The Columbia River Forest Reserve, Chiquibul Forest, and Vaca Forest Reserve are now areas of very high illegal activity, all by Guatemalans. They come in to poach endangered Scarlet macaws, shoot many endangered mammals for sale as bush meat, cut millions of dollars worth of lumber, pan gold illegally while destroying the watershed, plus so many other things.”

Katherine Groff, a researcher at Michigan State University, says: “Land scarcity has led to an expansion of communities within the Chiquibul-Montañas Mayas biosphere reserve in Guatemala, followed by growth across the border into protected areas in Belize. The lack of human settlement on the Belizean side of the border means that resource extraction is primarily driven by Guatemalan communities. Guatemalans regularly cross the border to clear land for agriculture, extract timber, poach wildlife, and cut xate, the leaf of a certain Chamaedorea palms used in the global floral industry.”

The Chiquibul National Park is, since 2007, managed by the Friends for Conservation and Development (FCD[1]) and Belize Forest Department. FCD has an annual operating budget of just $230,000 (to be compared with the 33 M$ budget of Yellowstone National Park, in the United States). It manages conservation posts in the park and performs weekly patrols to combat poaching and other resource extraction.

The park hires nine rangers to patrol the Park and survey the 45 km border between Chiquibul National Park and Guatemala. Lack of access roads, on the Belizean’s side, make the monitoring of the area very difficult.

The Scarlet macaw (Ara macao, Linnaeus, 1758) is a bird nearly 1 metre long from beak to tail feathers. It is a locally endangered species. It is estimated that only 200 birds are still living in the wild in Belize. The birds are captured at a very young age to be sold as pets in the illegal pet trade market. The process results usually the death of the majority of the hatchlings that are taken. In 2011, about 89% of the nests in the Chiquibul Forest were poached. Poaching accounts for 27% of the breeding failures in Scarlet macaw populations. On the black market, the price of a Scarlet macaw can reach 2,000 BZD (980 CHF).

Large areas of the forests are cleared for milpa[2] farming, thus destructing ecosystem habitats of several plants and animals. According to an article published in Tropical Conservation Science, in 2007 “satellite imagery indicated that in the Chiquibul National Park alone, 3,126 hectares of tropical forest have disappeared.” The financial loss for Belize is estimated at a million dollars annually. A reconnaissance flight, in 2015, has located 27 milpa farms within the National Park.

Xateros harvest the leaves of the Xaté palm (Chamaedorea ernesti-augusti). This plant that is also poached from Belize’s jungle is used for floral arrangements. According to the International Union for Conservation of Nature (IUCN), approximately 75% of Chamaedorea are considered threatened. Wild xaté plants produce only one or two new leaves per year. Bundles of 600 leaves are sold 38 USD (37 CHF) for Chamaedorea ernesti-augusti and 10 USD (9.8 CHF) for Chamaedorea elongata. In 2015, more than 11 million leaves of both species have been illegally collected, representing a value of near half-million USD (480,000 CHF). Many xateros are armed and ready to fight with Belizean law enforcement. In 2014, Tourism Police Officer Danny Conoroquie was shot dead by Xateros[3].

The Chiquibul area has an important mining potential. During the 1980’s, gold prospecting began in the Ceibo Chico area of the Chiquibul National Park. A prospection and exploitation license has been issued in 1999to Boiton Minerals/Erin Ventures Inc. (part of Ceiba Resources Ltd.). The exploration license covers a total of 34 km², and the mining license 0.39 km2. It has been extended in September 2007, to 1.6 km2. Orion Company possesses also a concession in the National Park. Gold also attract Guatemalans which practice illegal panning in the National Park. In July 2012, Rafael Manzanero, Executive Director of FCD, estimated that about three hundred people were extracting gold in the Ceibo chico area. The illegally extracted gold is sold 150 GTQ/g (19 CHF/g).

The problem dates from 1839, when Guatemala started claiming sovereignty over south of Belize. The 12,272 square kilometers of disputed territory south of the Río Sibún encompasses more than half of the former British colony. Several times, in 1945, 1972, 1975, and 1977, Guatemala threatened to invade but was to face British military power.

Belize is independent since 1981. Only in 1991 did Guatemala establish diplomatic relations with its neighbour.

The two countries reached, in October 2008, an agreement planning that each country would hold, on 6 October 2013, a referendum among their respective citizens, on whether to take the dispute to the International Court of Justice in The Hague. But Guatemala decided in 2013 not to fulfil this decision.

The disputed border is 240 km long. “We don’t have the manpower to patrol such an extensive border,” points out Néstor Méndez. The Belize Defense Forces has about 1,200 men in uniform, and its annual budget is 5 M$. According to John Saldivar, Belize’s defense minister, “The border is not very accessible. It’s dense mountain terrain. Our biggest constraint is inserting our soldiers into the forest. There’s no road access to the border, except at the border crossing. To get anywhere, you have to be inserted [by helicopter] or hike in. But we don’t have any helicopters.”

One of the main economic resources of Belize is ecotourism, which depends on the environment. Néstor Méndez says that “the destruction of our national parks is eroding our national assets.”

The political dispute over the border and the lack of agreement between the two countries has opened the way to large-scale environmental crimes. Mountain Wilderness urges the two concerned parties to definitively settle the question and insure the respect of national and international regulations regarding the preservation of the environment.