This highly topical short story – given the heavy snowfalls in January – written by Paolo Cognetti, author of “The Eight Mountains”, translated in 38 languages worldwide and winner of the 2017 Strega Prize, is dedicated to Mario Rigoni Stern.  His joining the ethics scientific committee of Mountain Wilderness is a further proof of his love for mountains. This short story, published courtesy of the author in 2018’s first issue of Mountain Wilderness Notizie and titled “Fiocca” (It’s snowing), appeared on 6 January 2018 in his blog http://paolocognetti.blogspot.it.  Cognetti will meet the public on 20, 21 and 22 July 2018, in Estoul, a hamlet of the village of Brusson, in the Ayas Valley, an enchanting place in the Aosta Valley where he is the co-organiser of the art, book and music high-altitude festival “Il richia­mo della foresta” (The Call of the Wild), which draws a large audience, especially of young people. An opportunity not to be missed if you want to meet the author of “The Eight Mountains”.

Dear Mario, how it’s snowing! All in all, since Christmas, more than one metre of snow has fallen and the same amount is expected in the next few days. A week ago it was icy snow, little sharp-edged crystals pushed to and fro by a freezing wind. The kind of snow that whips into your face when you walk in the street. Today it’s warmer and it’s snowing heavily, big thick snowflakes heap up fast outside. Though I am spending a part of my life in this hut I must admit that I don’t have a good relationship with snow: it makes me feel isolated, walking to the village gets difficult, sometimes even impossible, and even walking in the woods is hard when you sink up to your knees into the snow with every step. So I stay at home. I think of the wildlife that has found shelter in caves. From my window I watch the firs covered with snow, bending like hunched monks in their tightly closed frocks, and the slender and bare larches, fragile summer creatures that sometimes fall under the weight of snow, and in the afternoon I listen to the thunder of avalanches. Avalanches, if all goes well, rush down the mountainside in the same places each time. In fact we find ourselves waiting expectantly for them when it snows heavily and they have not yet come: we feel more comfortable once they have spent their energy and come to rest at the bottom of deep gullies than while the snow remains perched precariously above our heads.

We know them so well that we may give every single avalanche a name. But that roar still generates fear: it sounds like thunder or a roaring collapse above one’s head. Despite this, dear Mario, I am happy for my friends who work with snow. Everyone here depends on it, in one way or another, even those who lead their cows to pasture in the summer and sell their cheese to skiers in the winter. They were worried in November, since after a drought-stricken year water reservoirs for artificial snow were half empty and they would not have been able to shoot snow for a long time. Now they no longer need to shoot snow and my snowmaking friend often passes by, riding his snowmobile, jobless in those nights, when the sky does all the work. It is the piste-basher drivers who have been paid overtime, I meet them in the evening at the coffee bar and they drive up and down grooming the snow till dawn so that skiers may find the slopes ready when the ski lifts open in the morning. One drives past my home. While in bed, at night, my bedroom is flooded by the headlights of a huge scraper blasting next to my hut and if I am still awake I wave to him from behind my window. It’s no trouble at all, quite the contrary: some soul passing by keeps me company, just as so much snow makes me worry. Besides, I know the snow groomers: in the summer one works as a bricklayer and the other takes cows to high pastures. If they weren’t working I would invite them to my place for a glass of wine. 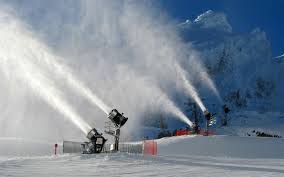 At home I have only wine, not a drop of water: after a year without rain not only water reservoirs for artificial snow are empty, but also my spring has dried up. Water reaches, or rather reached my place via the easiest way in the world: a pipe from the spring located a few hundred metres uphill conveys it to my hut. There has always been water here, it is not by chance that the name of the village is Fontane (Fountains), yet the other day I turned on the tap in the kitchen and an ever smaller trickle of water came out, until it was replaced by the guttural sound of empty plumbing. So I put on my snow shoes, grabbed my shovel and went up the tiny valley of Fontane to the spring that gives it its name, or at least to where it should be. I dug with the shovel and discovered that the spring had dried up under the snow. My black pipe was sticking out from the bed of the brook that usually flows in the middle of the pasture. I could have spoken into the pipe and said hello to someone in the bathroom.

Dear Mario, in my ten years spent in the mountains I have learned that whenever something happens there are two things you must not lose: your temper and your humour. It is ironic to be surrounded by snow and to have no water. I remembered that verse of the Ancient Mariner where the castaway, adrift in the ocean, complains about being thirsty: “Water, water everywhere, nor any drop to drink”. I have obviously tried in a more romantic way, discovering though that melting snow on a fire makes no sense, since it takes too long and burns up too much fuel. And what remains of a potful of snow is only one third or one fourth of water, that is not even drinkable. Thus, I went to the village and bought two 15 litre water bottles which I now fill with water at a fountain and drag to my place, carrying them on my back and thinking of my Nepali sherpas only a few months ago. One rediscovers the value of such a precious resource: a cupful of water is enough to brush one’s teeth, a potful to do the dishes, a small bucketful to flush the toilet. I will ask one of my friends for hospitality to have a shower. 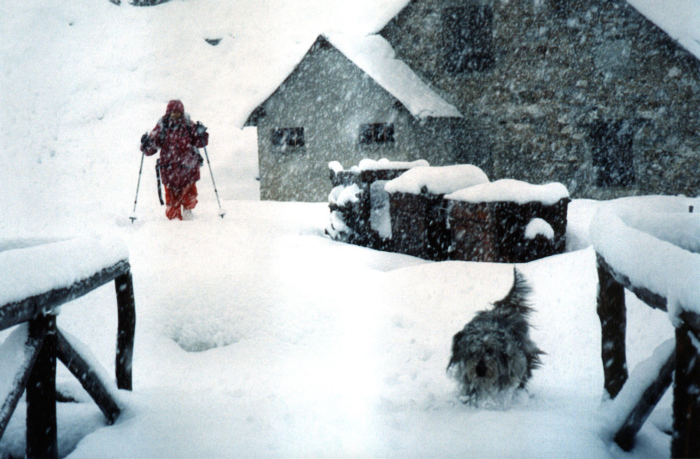 I have a skylight on my roof which allows me to imagine how it feels to be a creature living under the snow, like voles whose burrows I discover at the thaw. The heat of my home melts some of the snow on the skylight and I imagine that the same happens with the warmth of the soil. Thus, even under a very thick coat of snow, air chambers, bubbles with strange shapes develop, tunnels that follow heaven knows what heat trails. The snow ceiling above my rooms gets brighter when the sky gives a few hours of respite and the sun starts shining and I’m almost hoping for the spring to come and the snow ceiling to get patchy. But then it starts snowing again, the ceiling above my room thickens and everything underneath falls into darkness. Then tiny voles and writers with eyes skyward resign themselves: winter will last a long time yet.

Dear Mario, 2018 has started and it is ten years since you left. I miss you very much. I would like to read the news from your mountains, what you think whenever you watch the woods, what you discover, still at your age. I would like to read of the winters of long ago that the snow recalls in your mind, of the trails that it hides from your eyes, of the stories it tells you in the morning, disclosing night tracks to your hunter’s eyes. Here there is only a fox that comes to my place every now and then to see whether the dog has left some food in the bowl. People say that wolves have made their comeback, but I haven’t seen them so far and, to be honest, I don’t wish to. Outside it’s snowing, dear Mario, and I drink a glass to your health and think of all the secret water containers and reservoirs in the mountains, of gurgling caves, of underground streams, of what is upstream of springs. I think of all the wells that this year without rain has left empty. I think that today’s snow will be tomorrow’s water. Blessed snow.