This is what we are striving for

With more visitors than the Grand Canyon, the Mont Blanc does not really need to be introduced as a high flying international natural site for tourists (6 million/year), many of them (about 1 in 5) moving around its slopes by means of impressive mechanical installations. While news of its valleys spread over the media front pages with peaks of pollution equaling or exceeding those of large cities, a quiet revolution is under way on its flanks.
The French side of the mountain is served by two main facilities: the “Montenvers” train which provides access to the “Mer de Glace”, and the “Aiguille du Midi” cable car, a direct entry point to the high mountains. On the Italian side, the Aosta Valley has suffered for decades from the obsolescence of its infrastructure that prevents it from capturing the envied tourism windfall of the Chamonix Valley. A light wire sustains the “Vallée Blanche gondola” linking the “Aiguille du Midi” to “Helbronner”. During 2015 all these facilities will be provided, at various levels, with new gimmicks to attract customers.
Global warming, the erosion of a traditional customer base, necessary upgrades to new safety standards, unbridled competition between mountain resorts to keep existing clients and capture new visitors, especially international ones, are pushing operators to renovate their mechanical infrastructure to make them more attractive. We see the operators evolving toward a new status of “solutions providers” featuring more and more fancy entertainment structures. In this way, the Italians want to completely revamp the cable way installations linking Entrèves / Courmayeur to “Punta Helbronner”.

With global warming, the high altitude resorts of the Alps are in search of attractions to capture new customers (especially foreigners) to compensate for the erosion of their traditional customers base: skiers…

At the suggestion of the Italian Institute of Culture in Addis Ababa and with funding from the Italian Development Cooperation, the Mountain Wilderness Italy association is planning to organize, during the months of February/March, an introductory course on trekking management in the Gheralta Mountains of Tigray.

Sunday, October 19, together with Mountain Wilderness, young climbers and mountain guides have carried up at the heart of the Mont-Blanc, at 3400m on the glacier of the Col du Geant a strong requirement to end the nuisance caused by the motorized recreational aviation in this paradise of beauty and silence! They have drawn with very large, but short leaving, letters a requirement widely shared: “! SILENCE”

THIS ACTION HAS BEEN MADE:
– To reaffirm that Mont Blanc deserves to be protected
– To encourage the “future strategy” of “Espace Mont-Blanc” and especially the “airspace” component
– To ask for an rapid implementation of a harmonized, cross-border regulation of the range overflights.

This Great Alps crossing is a long travel route that should lead the team, starting on February 2015, from Monte Cinto in Corsica to the Slovenian Triglav. It will be all done, without motorized means. Various options will be explored as offered by soft mobility means to rally the jewels of the Alps.

From sailboat to paragliding, skiing or hiking. The various natural elements will drive the participants from wall to wall, allowing them to express a Mountain Wilderness mountaineering refreshing vision. The unique connections of aesthetic openings and great historical climbing routes will guide their journey during 5 months. 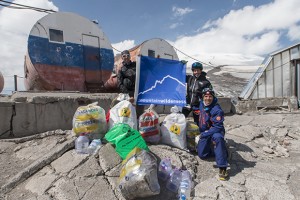 Paulo Grobel, a free lance to several mountains magazines, a Mountain Wilderness International Guarantor and a fine connoisseur of the Himalayas, especially Nepal, has launched a new original project : the “Sherpa Women expedition”. In partnership with Salewa, the project was launched in 2011. For the end of this year the mountain guide has invited five Western women climbers to rope up with as many Nepalese counterparts. The goal, after learning proper mountaineering techniques, will be to climb a summit such as the Tharpu Chuli (5663 m) in alpine style, in the heart of the Annapurna Sanctuary.

It took the death of sixteen sherpas in the labyrinth of the so-called “Nutcracker” icefall that separates the Everest base camp from Camp 1 for news of what has been happening for years on the slopes of the world’s highest peak to reach a wider public. But already back in 1997 Jon Krakauer, in his best-selling book “Into thin air”, had lucidly and bleakly described the degradation – complete with deaths and amputations – that the excesses of commercially-run expeditions have brought to mountaineering in the Himalayas. Anyone who thought that those reports might have led to a change of course was seriously wrong: what happened was exactly the opposite… (it continues here)

Mythic Summits. the problem of overcowding in normal ways

Recently, events such as the “Ueli Steck team” fight with the Nepalese’s Sherpa on the Everest’s normal way and the decision to put cops on the Mont-Blanc have hit the media’s front pages. Consequently raising general awareness of an increasing need to preserve these places from damages caused by a massive flow of people and to manage this flow to a level sustainable by the fragile ecosystems. (To read more click here)

The Alps Macro-Region: Toward an EU Strategy for the Alpine Region

After 23 years of commitment to a sustainable development of the Alps, the Alpine Convention is facing a new challenge that offers opportunities but also creates some concerns. Indeed, on December 19, 2013 the European Union decided jointly with Alpine states and regions to establish an Alpine Macro-Region. Already two similar Macro-Regions exist around the Baltic Sea and along the Danube. As its name indicates the perimeter under consideration will be much larger than that of the Alpine Convention. It will include vast regions such as Rhône-Alpes, PACA, Lombardy and Bavaria, for example, but also large urban centers such as Lyon, Milan, Vienna and Munich bringing along their respective political and economical weight. (More here)