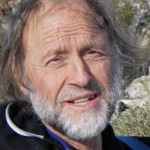 Richard Goedeke is member of the Alpenverein sections Braunschweig and Bayerland, was speaker of the regional youth sections of the Alpenverein 1970-75 and member in the board of the German Alpenverein 1981-1991, working on the development of compromise conceptions for sustainable climbing also in ecologically sensitive areas. Since 2005 he is also speaker of the team Culture of the Alpenverein. He took part in the foundation of Mountain Wilderness in Biella in 1987 and has been guarantor and active supporter since then. He was invited to membership in the GHM and the CAAI. In 1995 he was awarded the Ernst-Enzensberger-Prize, in 2009 the “Pelmo d’Oro” of the province Belluno for his alpine career and the “Bundesverdienstkreuz “ for his activities in education, preserving ecology and mountain sports and establishing cooperation between them.