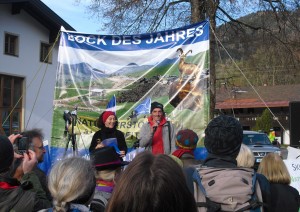 On Sunday December 14th Mountain Wilderness (MW) Germany awarded the “Buck of the Year 2014″ prize for the biggest environmental offense in the German Alpine area to the United Liftbetriebe Sudelfeld” for the construction of the largest snow-making basin in the Bavarian Alps. “They have earned the award,” said board member Dr. Gotlind Blechschmidt. “Because the Liftbetriebe Sudelfeld have provided the best example of backward-looking strategy in terms of winter tourism.”

As expected, the winners did not participate in the ceremony.

Significant positive temperature and no snow

Even with the new 150,000 cubic meter storage tank and 80 new snow cannons the Sudelfeld remained closed on Sunday. No wonder: At the time of the award ceremony more than ten degrees C and sunshine prevailed in Bayrischzell, while in the ski area only some shady places were covered with a few inches of snow. Thus the conservationists could not have chosen a better time for the award. Blechschmidt: “Last week the snow cannons were still running, and now the whole artificial snow is gone. Isn’t that an exemplar picture of the futility of the exploitation of the Sudelfeld ski resort? ” 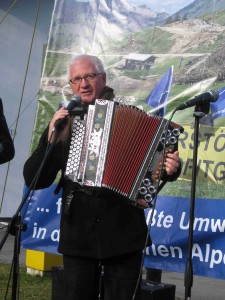 A total of about 150 spectators and guests gathered for the ceremony and thus expressed their support to the concerns expressed by environmentalist organizations. Among those the “Hans Well and the Wellbappn” group was a very prominent supporter. They modified the traditional folk song “Bayrischzeller Heimatlied” in a satirical way under great applause. “I have been against snow-making equipment and reservoirs for many years – and especially against big ones like this” said Hans Well after his performance.