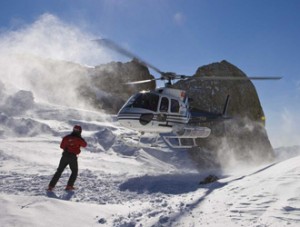 As of January 1st, permits to land on the mountain will be withdrawn

A historical agreement was signed late in 2011 by the company that manages the cable-cars on the Marmolada, and Mountain Wilderness. After around a decade of environmental battles, heli-skiing is to be banned on the ‘queen’ of the Dolomites: well-heeled tourists (a 10-minute trip costs 160 euro per person) would take off from nearby points (usually from Passo Gardena and Monte Cherz, in the Alto Adige/Sudtirol region), land on Punta Rocca and ski back down to the valley. “Yes,” confirmed Mario Vascellari, chairman of Marmolada Ltd, “we will no longer allow helicopters to land. But the talks we have begun with Mountain Wilderness embrace a broader field, with the objective of encouraging quality tourism on the Marmolada through sustainable solutions that can be adopted elsewhere in both the Dolomites and across the Alps.”
Exultation was the natural reaction of Luigi Casanova, Trentino head of Mountain Wilderness, and protagonist of a thousand battles to save the Marmolada. “This is a partial result as it only concerns the responsibility of the company that manages the lifts, though in itself it is a historic agreement. More so because the first article of the agreement signed with the company Marmolada Ltd respects the guidelines of the Alpine Convention. In a broader perspective, we are aiming to re-launch what was once considered the ‘queen’ of the Dolomites with sustainable solutions to be adopted at Passo Fedaia in terms of traffic flow, car parks and routes for cyclists, skiers and walkers with historical and nature highlights. We shall be meeting again with Marmolada Ltd very soon and drawing up a joint programme over the coming two/three months that will be submitted to the Autonomous Province of Trento and the Veneto Region.” Casanova emphasised the importance of the ban on heli-skiing: “It’s the wildlife that suffer the most: chamois and black grouse which winter over on the sunny slopes being careful how they use their energy, are forced to move to places where it is much more difficult to find food. In certain conditions, heli-skiing can also be the cause of avalanches. Then there’s the noise that breaks the silence, and disturbs the people such as ski tourers, who come to the mountains for genuine experiences.”
The Marmolada and the Sella Group (famous the world over for its ski roundabout the ‘Sellaronda’) have always been favourite destinations of ‘heli-skiers’. It’s no coincidence that the Autonomous Province of Trento and Bolzano, along with the Valle d’Aosta Region, are the only authorities in Italy to have passed legislation regarding heli-skiing.

“The helicopter lobby, supported by that of the ski instructors and alpine guides, has always blocked the approval of a national law,’ the Trentino environmentalist reported.‘In 1998 Parliament was on the verge of passing a law, but nothing came of it. In Trentino the law used to be pretty strict, but in 2011 the 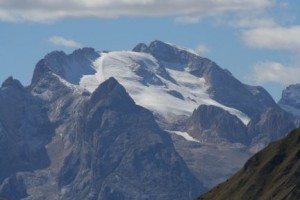 Province relaxed things and raised the limit for landing and take-off from 1000 to 1600 metres. But the most worrying situation is undoubtedly in Alto Adige/Sudtirol where a private company has been granted permission to take off from Passo Gardena and Monte Cherz, above Passo Campolongo in Val Badia. And in many cases we’re not even talking about heli-skiing because the passengers pay very high fares for a 10-minute tourist flight. I do understand the holidaymakers,’ concluded Casanova, ‘as I too fly across the Dolomites for work, and some days it’s simply breathtaking, but the environment is being subjected to very serious damage.’ But as of today, at least on the Marmolada, chamois and black grouse will be able to enjoy a quiet winter.