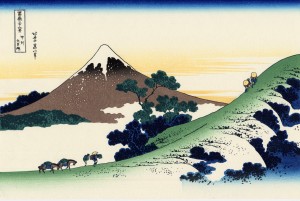 The iconic Japanese, cone-shaped, Fujisan was officially recognized as a World Heritage Site at the annual UNESCO conference held in Cambodia, a registration which some in Japan have worked toward for almost a decade.

The United Nations body selected the mountain as a “cultural” rather than a “natural” heritage site.

It is featured prominently in historic Japanese art work, including wood blocks prints. It is also one of the traditional “Three Holy Mountains” – along with Mount Tate and Mount Haku, both in central Japan.

Unesco said Mount Fuji had “inspired artists and poets and had been the object of pilgrimage for centuries”.

Unesco documents singled out a series of wood block prints by Katsushika Hokusai, the Thirty-Six Views of Mount Fuji, saying they “had a profound impact on Western art in the 19th century and allowed the form of Fujisan to become widely known as the symbol of ‘Oriental’ Japan”.

Mt Fuji has been plagued with garbage dumping problems for a long time, to such a degree that the government decided to give-up the nomination as a natural heritage and submitted instead a proposal based on its cultural features. There are concerns about the additional increase in tourists traffic to a mountain which already host up to 300 000 visitors annually. In order to bend this trend down a fee of $10 is expected to be charged to climbers during the peak season