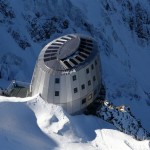 The new Goûter Hut in the Mont-Blanc, one of the highest in Europe, has been allowed by the mayor of Saint Gervais (Haute-Savoie, France) to open on the evening of June 27. The sub-departmental security commission had recently issued a statement favorable to its opening..

This is a big releaf for the mountaineers attempting the ascent of the Mont-Blanc.

Perched at 3,835 meters above sea level, this building of ovoid and futuristic architecture is located on the normal way of the Mont-Blanc, the busiest route to the top. More than 200 climbers a day are expected to be seen on this route during the peak season (June 15 to September 15).

Showcase of the French Alps, this refuge was originally expected to open in early summer 2012 and to replace the old building, now obsolete, which will be demolished

For several technical/safety reasons its opening was postponed a few times.

At a cost of 7 million euros, it should work based exclusively on renewable energy (solar, biomass) and use innovative technologies (snow melter, waste-water treatment).