Translation of the last article Published January 7, 2015 by Fabrice Nicolino, wounded on January 7. 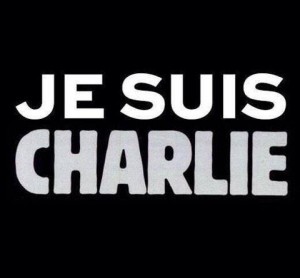 This satirical paper was initially published on 31 December 2014 by Charlie Hebdo, under another title. I have tried to translate it as a tribute to Charlie Hebdo which expresses views close to those of MW.

However their style is difficult to translate without losing the humor. As I am not a professional translator I may have missed it somewhat. Sorry for that. 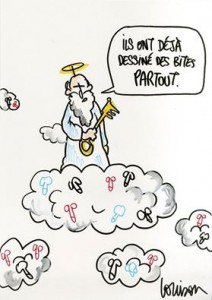 Long live climate change! If everything goes in the right direction, mass tourism is living its last season. There is less and less snow in the mountains and summer beaches are disappearing rapidly too. It’s about time we made a stand.

Let’s hold the scalpel without trembling: Charlie is the Anti-France. It does not just stay here, in bed, while the military music plays, but it spits on the war memorial, better twice than once a day.

Mass tourism is the enemy! And so it is with infinite pleasure that we tell you, in these celebratory days, of the ski resorts disaster. Why? Because, the silly chap called snow has not shown up! Ski resorts mourn for their old snow and just count the cancellations.

To fully understand the scale of the tragedy, friend of nature, relate to history, which, by the way, gives an opportunity to throw out the Christmas turkey stuffed with antibiotics. What to say? Among the first resorts, Megève, born in the 20s of the last century on the pressing snow desires of the Rothschild family. The real boom dates of the sixties – the horrible “Thirty Glorious” – when the first Gaullist technocrats designed new cities and ski areas combined with car parks and dormitories on their drawing boards. Then flourished a number of “integrated resorts” where the “Dugenou (Mr Knee)” could cure his cold and chapped skin in the dripping nightclub where coke slowly but surely replaces martini and gin. In passing the mountain and the hardness of its slopes are forgotten, replaced by mechanical lifts, cable cars and ski lifts. The 1968 Grenoble Olympic Games, of which we can never say enough of the crap they have sown, complete the movement.

This is plain terror. The mountain becomes as artificial as Marne-la-Vallée or the A4 motorway at the Nogent bridge (an eastern Paris suburban new town). And then comes climate change, to which the asshole generations that made their fortune in the resorts have contributed so much, redistributing all the cards. We will not discuss here their exact responsibility, but there is at least an overlap between the climate crisis and the current scarcity of snow on the hills of France. All Alpine glaciers are retreating at an astounding speed, and the famous “Mer de Glace” glacier has lost 2.5 km in length since 1830. And it continues to lose 4 to 6 meters of depth each passing year. Since 1958, the average temperature in the Alps increased depending on corners, between 1 and 3 degrees.

That’s the good news: there is no snow, no twits. Still a few days ago – Charlie being not Mr. Weather, things may have changed – more than 200 ski resorts could not open their cursed doors. You had to go above 2000m to inaugurate your new 800€ Salomon skis. Yee ha! As there is no question of losing all the money invested in the cardboard and trinkets, for the most “wealthy” resorts one last solution remains: snow guns. Val d’Isere, for example, has invested two million Euro in these valiant phallus. Val d’Isere: 1600 inhabitants, but 15,000 beds in winter and 7 supermarkets.

In the Southern Alps, according to the on-line site Dici.fr, 1500 guns have been deployed in the explicit context of a “snow war” to “save the start of the ski season and the whole economy of the Southern Alps”. Don’t mock the poor though: at Risoul (Hautes-Alpes), same picture. The village mayor Max Bremond, also head of the station proudly declares, “We have invested millions of Euros in artificial snow.”

Tourism Marketeers are inventing new terms (“farmed snow”) euphemistically as hell, for artificial snow, to plaster on flyers without the risk of displeasing the delighted petty bourgeois. N.B. In French there is this subtle word difference between snow making or growing (Neige de culture) and “artificial snow”. Never say again “artificial snow” which stinks of its big water cannon origin, but rather “snow growing” which evokes more ravens in the wheat fields of Van Gogh or the latest Jim Jarmusch movies. And besides, since we are talking about authorized vocabulary, avoid saying cannon or gun, a disturbingly reminiscent of killing, but snow maker (enneigeur). Keep snow-making in the fog.

There remains the technique of “growing” the beautiful crystal of the summits. Flaine, in Haute-Savoie, was the first to be equipped with snow cannons in 1973 and since then, thousands, tens of thousands have been installed. Why? Because the small guys who laid down the bucks to fund resorts require at least a 5% return per year. As the number of skiers is stagnating, it is essential to increase the number of ski days. Snow is gold and the cannon is his prophet.

But before the large fans start to vomit snow from pipes, you need water. Count on average, according to figures from Mountain Wilderness, 4 000m3 of water per hectare of track, whereas corn, another big drinker, uses only 1 700. In the Alps, an estimated 95 million m3 of water are diverted each year for snow, or the annual consumption of about 1.5 million inhabitants. At the expense of rivers, rain and even the drinking water network.

Let’s not talk (because Charlie has readers on the slopes), of the chemical additives often added to the water to facilitate crystallization or the risible electricity bill – 25,000 kWh per hectare per year of track – or the deafening noise of the facilities. The sole consolation: everything will collapse. When? Soon. When? Not soon enough.

(This article was translated by Bernard Marclay and revised by Duncan Wilson.)

Here is the Blog of Patrice Nicolino

Charlie Hebdo explained in its covers