A lot of facilities mainly for tourism, but also for industrial, agricultural and military purposes… are left abandoned in European mountains. These installations which are no longer in use, often injure the landscape as genuine scars.

As they are obsolete they should disappear. 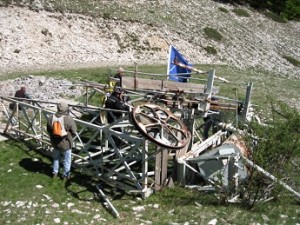 Heaps of old iron or concrete, pylons and cable lifts, old facilities near shelters, small buildings for various purposes … they materialize the disengagement of the actors at the end of the life cycle of their business operation. It’s not only a visual visual pollution, it’s also a real danger to hikers and to wildlife.

From 2001, Mountain Wilderness organizes each year cleaning operations in various European and remote mountain ranges (Ecrins, Mercantour, Elbruz, K2, Huayshash …), demonstrating that it is possible to restore the mountain’s natural state. The Mountain Wilderness activities is structured around 3 topics: inventory, dismantling and awareness.

An inventory is underway around the Chamony Mont-Blanc Valley, here is a status:

Hikers in the region are invited to report to Mountain Wilderness on missing obsolete facilities.