Starting with an expedition in Bolivia carried out by mountaineers from Catalonia, last year Mountain Wilderness International launched a project to measure the human impact on high peaks. Now the project has its own dedicated website, and it is receiving data on different mountains all along the world.

As said above, the starting point was described with the following chronicle: 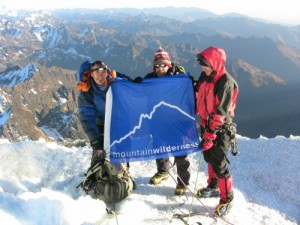 Mountain Wilderness International is currently working on the report and on the creation of a website with further
information about the project. “Wilderness” can be defined as untamed nature that has not been altered by human activity. This spirit of wilderness is becoming increasingly difficult to preserve as it becomes overrun with facilities which, due to a lack of control, occupy unspoilt areas and promote sports such as heliskiing, turning mountains into adventure theme parks. Mountain Wilderness International was founded in 1987. Year after year, it organises awareness campaigns and protests to defend the unspoilt state of mountain areas to ensure that they can be