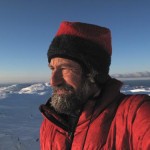 As a boy he dedicated himself to the knowledge of the mountains and nature in Europe – particularly in Scandinavia and other northern regions, where he worked in a school on environmental education. Photographer and writer (has been awarded several awards on mountaineering literary and journalism)

Editor of the magazines “Alp e RdM” for many years he is an original explorer and international guarantor of Mountain Wilderness, he is among the top Italian experts in the field of large mountain ranges and wilderness crossings on foot.

As a journalist and nature photographer ha has been published in many Italian magazines and is also a popular lecturer with at least 250 appearances.. He is also the author of several trekking guides

As a geographer, he is engaged in research on Alpine tourism and teaches courses on “natural” methods of orientation. A member of the CAI Mountain Wilderness and Legambiente, he is committed to promoting a respectful man – natural environment relationship.

After the integral traverse of the Alps (81 days), the Pyrenees (39 days), Norway (150 days) and Iceland (33 days) made during his youth, he continues a search on the meaning of exploration, especially in the Arctic lands and in the Andes, where he crossed several cordilleras collaborating in the training of local guides, but also in his home mountains.

Since 1998, he is a counter-cultural example and witness in a society becoming ever more virtual. He likes to travel with one or two companions through rugged lands, finding his way exclusively with human eyes and faculties. In complete loneliness in nature without GPS, radios, maps, compass and clock, as a migratory animal or an ancient human. Showing the many solutions that our civilization has forgotten tin the relationship between man and nature.

He recounted his experiences in hundreds of articles, conferences, and in the film “La via invisibile”. He teaches courses and seminars for professionals and amateurs and collaborate with nature television.