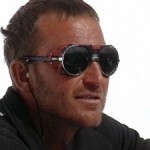 Is Born in Trentino, in Rovereto, in 1959. At a very young age he began to explore mountains and climbing driven by an inexhaustible passion for the vertical world.
Since 1985 is part of the Italian Academic Alpine Club, the French « Groupe de Haute Montagne » (GHM) and is a guarantor of Mountain Wilderness . He became a mountain guide in 1989 .
Climbing since 1979, his experience ranges from the high difficulty of the Himalayas walls with more than a thousand climbs on rock and ice, often beyond the 6th grade, adding hundreds of new trails, dozens of first winter and solo, all of extreme difficulty to his course book.
After acquiring a basic mountaineering experiences on most of of the Alps walls and summits, repeating hundreds of historic routes of varying difficulty and in all types of whether conditions and seasons, he turned to experiencing new mountaineering limits, clearing modern paths never crossed by others, in search of his psychological and athletic limit.

His experience includes numerous new routes of extreme commitment, clearing the most demanding Dolomites faces, first winter climbs and fast solo routes, all very challenging climbs for well prepared teams.
A passionate traveler with an activity of more than 50 expeditions around the world, he has climbed above 8000 meters (Broad Peak, Gasherbrum II) but has also researched and climbed many other icy and rocky mountains, from the peaks of Patagonia (Cerro Torre , Fitz Roy, Cerro Pier Giorgio, etc..) the walls of Mount Kenya, Aconcagua, the Mustagh Ata, the Golden Peak (Spantik), the Trango Towers, Uli Biaho, Ogre, Kedarnath Peak, Baruntse II, Ama Dablam , Mount Cook , to the Karakoram mountain range in the Andes. In brief from Europ to the Americas to Africa and Asia.
He has published three books on Marmolada