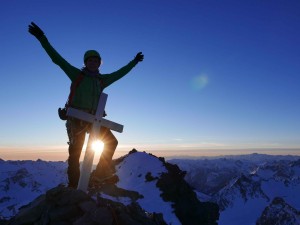 After Argentera and the winter ascent at Corno Stella, Yo and Yann wanted to do something not too technically challenging, less physically demanding and to find its essence in the uniqueness of the alpine playground they were on. This is how they got the idea of linking some emblematic Ubaye mountains such as Brec, Chambeyron and Aiguille (Needle), as well as the famous Pierre Andree peak. The first summit is remarkable by its shape, the second, the Aiguille du Chambeyron (Chambeyron Needle), is the culminating point of the Ubaye range and has a nice edge, and finally the third is known for the quality, texture and color of its rock , a protogine red stick that has nothing to envy to the Grand Capucin (in Mont-Blanc range) 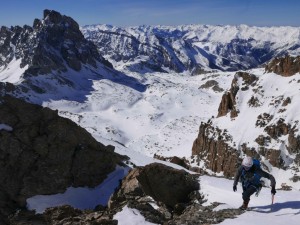 Following the two big stages linking Isola 2000 to Larche, they arrive at the GTA Larche lodge, greeted by Bernadette Laurène and Nicolas. Then following a long morning of equipment preparation and reshuffling they go 1500 m up for a late arrival at the Chambeyron hut. This is a very nice shelter where they can enjoy a welcome day-off after the difficult journey from Isola and before attacking the “Brosserie Ubayenne”( Ubaye Brushware) !
Up at 3:45, not a cloud, no blowing wind for the moment, as it was from the arrival in the Southern Alps,! But Yoann, penalized by a sour knee, decides to play it safe by not taking his paraglider with him at the risk to carry it for nothing. They must spare energy as the road ahead is still long.

Under the waning moon and after leaving part of their gears at Long Lake, they go light to swallow the 500m vertical drop of the Northern Corridor, with the wish to watch the sunrise at the Brec top.

On this hard snow, the 2 friends get easily to the summit plateau which offers an ideal launching area! With the sun just up and a light east wind the take-off occurs just a little below, at the corridor exit.
1, 2, 3 … and the run is on… The paraglide rises steadily, everything is fine!

A few minutes later, Yann lands nearby the gears while Yoann backs down the corridor, now they are ready to attack the Gastaldi corridor.

Despite the early hour they plow on the soft snow up to the Nérot-Vernet breach, the starting point of the Chambeyron edges crossing.

This classic route leads to the highest peak of Ubaye in a very aesthetic and technically affordable way. After tying their rope they proceed along a ridge becoming increasingly narrow to reach a chimney going to the first summit, another beautiful and fine ridge, and here they are at the summit cross. 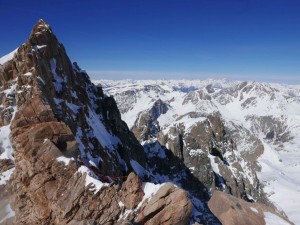 After a short but nice sight view from the top, downhill they go for an uncomfortable and a bit erratic run … Back to the breach, filling bag packs again for the umpteenth time that day while eating snacks, skis back on, they slide down the corridor on very hard to ski crusted snow. Nevertheless they are happy to slide right under the beautiful Pierre-André Needle. 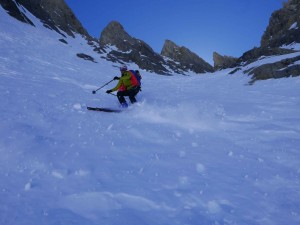 Getting too low, yet it takes some effort on delicate slopes to finally see the day’s last goal with a good surprise: this time, climbing will be under the sun. 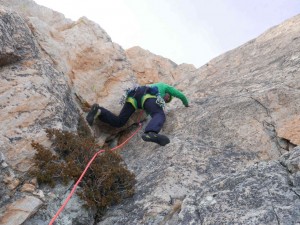 So it is on a beautiful rock that they climb four 60m stretches before they can stand-up at the top under the sun.

Once at the foot of the Aiguille, after an easy descent, they must hike back-up to a small Pass under the Aiguille Large. From there, Yann takes off paragliding while Yo glides down on foot to the Maljasset CAF hut where they get a warm welcome by Stéphane Emilia and the young hut keepers… and the « Sauvage » (Savage); (the rightly-named local beer) is a great treat. 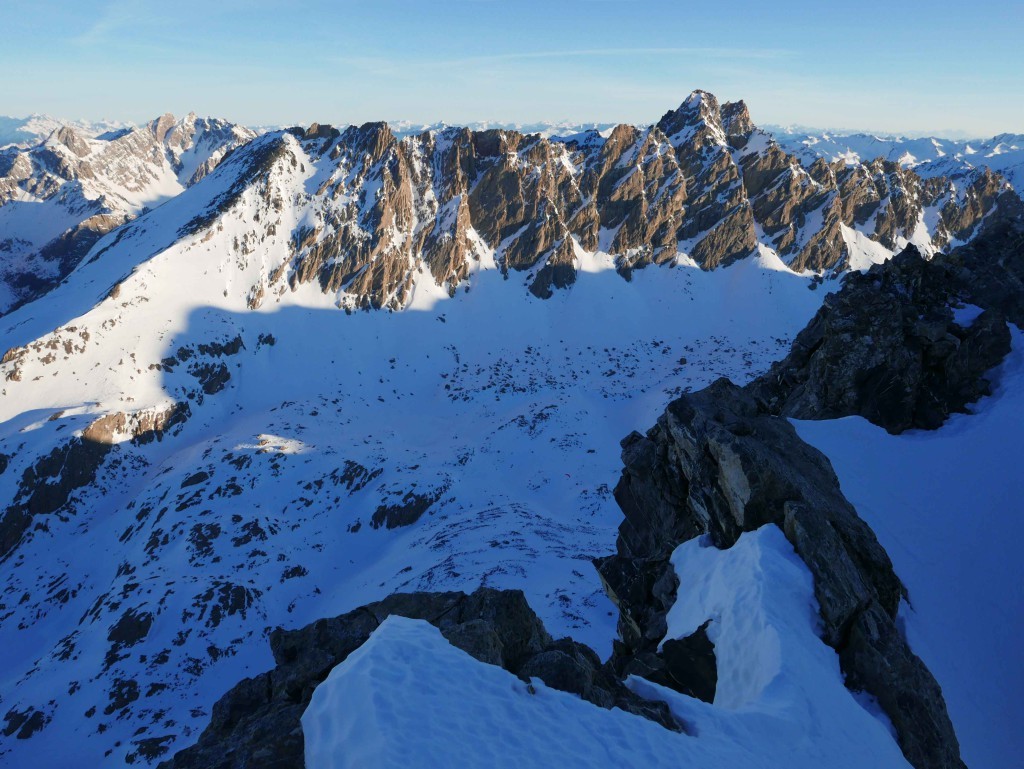 A weather disturbance is announced, it will force them to wait for a few days before going to Viso. But this is rather welcome as Yo’s knee winces (forcing him to rest), luckily a cabinetmaker offers him to work at its workshop in Barcelonnette… Meanwhile Yann will use his free time to discover the area, ski touring with the hut’s friends.

As soon as the weather will permit, they will be on the road again…

(Written by BM: Based on the article published by Yoann and Yann)