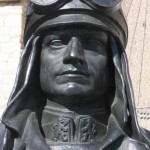 A ceremony to pay tribute to Milan Rastislav Štefánik (1880-1919) has been held on June 20th in the presence of Mr Marek Estok the ambassador of the Slovakia Republik, Eric Fournier the Mayor of Chamonix and mountain professionals. It was held at the foot of the Stefanik stele in front of the VALLOT Observatory

Milan Rastislav Štefánik was probably one of the most significant personalities in Slovak history because of his great contribution to the establishment of the Czechoslovak Republic. He was its only minister of war and a worldwide recognized scientist/astronomer.

Born in 1880 in Košariská, a village near Brezová pod Bradlom, he left Slovakia as a young man to study in Prague and then in Paris with professor Pierre C Janssen. He directed activities in the Meudon observatory and at the astronomical observatory situated on the top of Mont Blanc that he climbed six times. He made many scientific expeditions across the globe, visiting Africa, South America, Russia, Central Asia, and the South Pacific.

He was one of the pioneers of military aviation, joining the French army at the outbreak of World War I (Slovakia was at the time part of German-allied Austro-Hungary) and, in a stellar career, rose from corporal to brigadier-general.

Along with the Czech statesmen Tomáš Garrigue Masaryk and Edvard Beneš, Štefánik was part of the lead team who drove to the establishment of an independent Czechoslovakia at the end of the war. It was not just his diplomatic skills which helped bring about this achievement but also the role he played in forming and leading the Czechoslovak Legions which fought on the Entente side in the latter stages of the war. He died on the crash of his plane near Bratislava on May 4th 1919.

During this event, fully consistent with the tribute to General and astronomer Milan Rastislav Stefanik, Eric FOURNIER formally announced the joint application of Chamonix-Mont-Blanc and the CREA (Center for Research on Altitude Ecosystems) to acquire the VALLOT Observatory.

Fungi and lichen patterns can also be indicators of global warming trends. Mushroom growth is believed to be linked to annual snowfall levels, and lichens are indicative of glacier melt. The Everest region is acutely vulnerable to climate change#Everest #glaciers #climatecrisis #snow #globalwarming ... See MoreSee Less

In shadow of giant mountains, they explore vital world of mushrooms

Travel barriers, and their costs, have thwarted scientific study in the Everest region, which makes mycologist Shiva Devkota's work all the more important.
View on Facebook
· Share

The United Nations is working to map glaciers in northern Pakistan to quantify the melting of ice caused by warming temperatures and set up early-warning systems to help the recently flood-hit nation adapt better to future climate risks ... See MoreSee Less

The United Nations is working to map glaciers in northern Pakistan to quantify the melting of ice caused by warming temperatures and set up early-warning systems to help the recently flood-hit nation ...
View on Facebook
· Share

Mountain Biodiversity 2002-2022: achievements and next challenges at global/regional level: Mountain Partnership "While we have already achieved a lot, we still have to ensure that #mountains receive the political attention - and funding - they deserve" Alpine Convention Ministero della Transizione Ecologica#MountainsMatter ... See MoreSee Less

Twenty young women aged between 15 and 25 took part in the basic course in eco-friendly mountaineering "Girls in Action!"This is one of the many courses Mountain Wilderness has held over time to train locals as guides and give them a livelihood, while protecting the environment, preserving mountains and respecting local culture and traditions.Many thanks to our partners ISMEO and Club Alpino Accademico Italiano as well as to Scarpa Spa for the 30 pairs of boots they donated and to Banca Sella and Mountain Partnership for their financial support! #empowerment #GirlsInAction #Swat #Pakistan #HKH #ecofriendly#mountaineering #wildlife #mountainsmatter #mountainlovers #climbing #cleanclimbing #leavenotrace #donoharm #nationalpark ... See MoreSee Less

Here is a brief report by Carlo Alberto Pinelli on the “Girls in Action!” course that was held in August. “The course to teach a group of Swat girls the basics of outdoors activities (combining ...
View on Facebook
· Share

Unprecedented heat waves that swept the planet this summer are melting snow and ice not just in Europe’s Alps but in the iconic Himalayan range, where the mountains shelter the largest reserve of frozen freshwater outside the North and South poles. Global warming is accelerating the loss of Himalayan glaciers much faster than scientists previously thought, destabilizing a fragile system that’s helped regulate the earth’s atmosphere and key water cycles for millennia. ... See MoreSee Less

Dissolving snow and ice in the iconic mountain range is contributing to floods in Pakistan, droughts in China and changes on Mount Everest.
View on Facebook
· Share

Fungi and lichen patterns can also be indicators of global warming trends. Mushroom growth is believed to be linked to annual snowfall levels, and lichens are indicative of glacier melt. The #Everest region is acutely vulnerable to #climatechange https://www.washingtonpost.com/health/2022/09/18/everest-mushroom-trek/

The United Nations is working to map #glaciers in northern #Pakistan to quantify the #melting of ice caused by #warming temperatures and set up early-warning systems to help the recently flood-hit nation adapt better to future #climate risks https://www.bloomberg.com/news/articles/2022-09-15/un-starts-world-s-biggest-glacier-mapping-plan-in-pakistan

Mountain Biodiversity 2002-2022: achievements and next challenges at global/regional level: @UNmountains "While we have already achieved a lot, we still have to ensure that #mountains receive the political attention - and funding - they deserve" @alpconv @MiTE_IT