Carlo Aberto Pinelli Interviewed by The Express tribune in Islamabad

ISLAMABAD: A new course conducted by foreign trainers this summer promises to impart training on all aspects of mountaineering to people hoping to become instructors or guides. 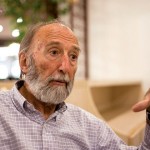 In an exclusive interview, Italian mountaineer Professor Carlo Alberto Pinelli said the programme would provide opportunities for people in Gilgit-Baltistan and revive the traditions of trekking and mountaineering.

Some 25 people have been selected for the first batch, including three are from Afghanistan. Pinelli said four women had been selected to become instructors and trekking leaders. “I was surprised to see many women turn up, even women in their 40s, to join the training programme.”

Many smaller mountains are rocky and require rock climbing skills, Pinelli stated. “One must know the geography and geology of these mountains, how to deal with altitude sickness and foreigners, how to navigate using a compass, map reading and psychological insights.” Navigating ice, rocks and snow, and the proper use of safety measures, will also be taught, he added.

Pinelli has been visiting Pakistan since the 1950s. Reminiscing about the good old times, he said that Pakistan was a great tourist spot and many foreigners would come here for trekking. “There are some wonderful challenging peaks in Pakistan. From Shimshal to the Chinese border, there are about 50 peaks between 6,000 and 6,500 metres high that have yet to be conquered.”

The mountaineer was of the view that foreigners were hesitant to travel to restive areas. “For us the Himalayas imply purity, untouched by humans,” he stated. Speaking of Swat, he said the peaks were perfect for local mountaineers, but even Chitral was out of bounds now. However, locals are now becoming more aware of ecological hazards and they don’t litter at all, he added.

Mountain Wilderness, a non-governmental organisation dedicated to the preservation of mountain areas, has a worldwide reach with representatives on all continents. Its Pakistan chapter is the only one in Asia that this for will work to train people in mountaineering. The course will begin on August 16 in Shimshal.