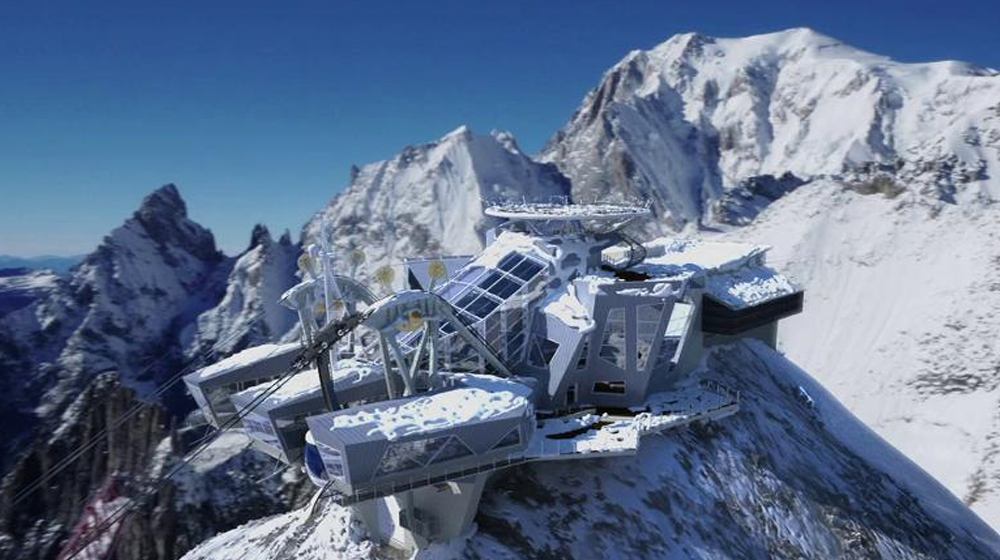 The triumphant inauguration of the new Monte Bianco Skyway with its rotating gondolas carrying people from the Entreves (Courmayeur) hamlet to Pointe Helbronner in two steps, has caused strong negative reaction from Italian environmental organizations.
Situated on the border between Italy and France, the Pointe Helbronner had, a while back, already been tampered to accommodate for the building of the Vallée Blanche cable car station, linking the Aiguille du Midi in France.
Mountain wilderness Italy is not only concerned by the scandal caused by the disproportionate size of the new cable car installation, its entertainment and dining character and direct impact on the landscape, but also and more puzzling by the arrogant attitude and the will to commoditize the high mountain space expressed by the project’s stake holders. The Alps are still largely perceived as a high-altitude” continent”, a place increasingly fragile, where those who really want to experience the wilderness can still do it. In this perspective, the Mont Blanc massif should be protected and positioned as the center of excellence of this “continent” with a fundamental ethics and culture role. Instead what we see up there today, is a project (or lack of) concentrating the most damaging aspects for the mountain: the silence of the great glaciers broken by the constant flicker of tourist helicopters and airplanes, construction of increasingly intrusive huts becoming similar to hotels, mountaintops turned into glass floors terraces for those who want to feel the thrill of danger but without the risk: everything done is leading to a reduction of authentic experience toward commercialized entertainment. Thus the battle fought by the environmental groups led by Mountain Wilderness for the preservation of this space, appears more than justified. Let’s make sure that this consumerist experience is only an isolated case of ignorance and does not expand as a contagion.

Unfortunately Mountain Wilderness fears have been quickly confirmed: indeed the RAI (Italian public TV channel), in conjunction with the company managing the Skyway has decided to produce this Summer, between the Mont Blanc peaks and glaciers, an “Isola dei Famosi” (Island of the Famous or Celebrity Island), a TV show popular in Italy. Using guides from Courmayeur, various groups of celebrity, but totally ignorant of mountaineering will be exhibited on ice slopes, sharp ridges and rock faces.
Environmental associations, especially the Italian Alpine Club, have immediately raised their voices against such a reckless and spectacular commoditization of the high mountain. It is baffling anyone who cares about the “meaning” of climbing experience, to see the Valle d’Aosta guides, heirs to a noble tradition, being players in such a humiliating farce.
Mountain Wilderness Italy ethics and scientific committee fully supports the action launched by the Italian Alpine Club (CAI) and invites the RAI responsibles to withdraw from this shabby and morally harmful desecration