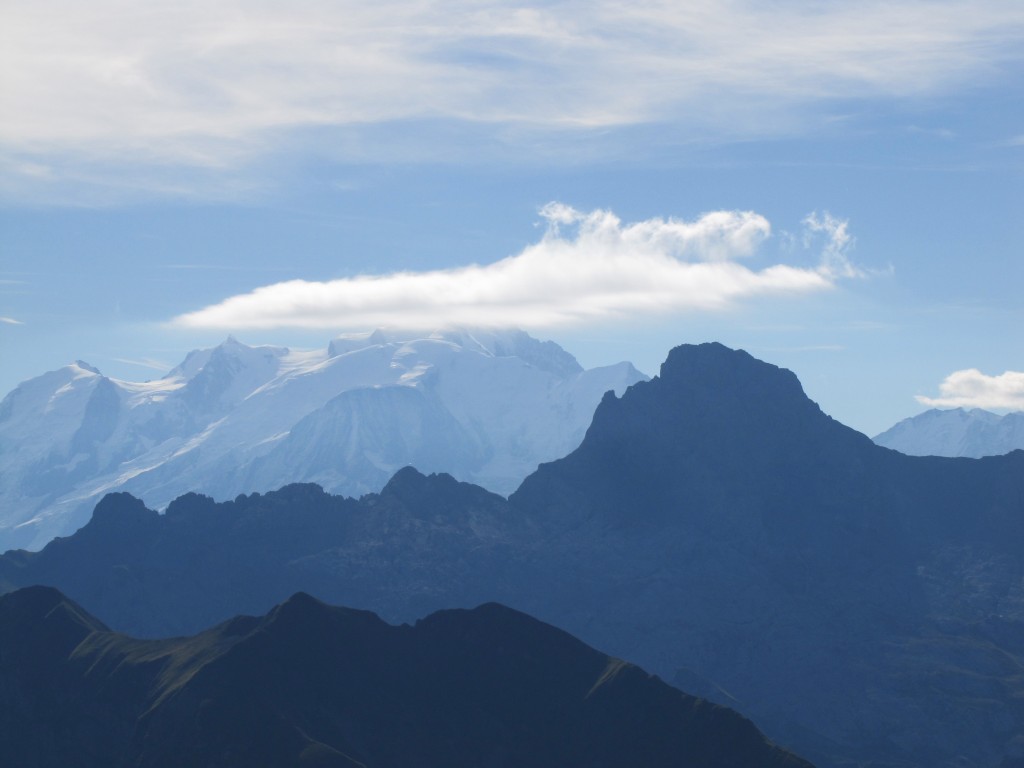 But who cares of the Mont-Blanc preservation?

25 years ago Mountain Wilderness proposed to create an International Natural Park to give Mont-Blanc the level of protection that such an emblematic site deserves and would normally have got in most countries, but not in France nor Italy. When the question of the Park was raised to the public most local authorities reacted very adamantly with the motto: “We can take care of our territory ourselves and it is nobody else’s business”.
In reaction to the Mountain Wilderness proposal an entity called Mont-Blanc Space (Espace Mont-Blanc, EMB) was created with the participation of the municipalities of the 3 countries surrounding the massif. The French ministry of Environment was put on top of the head organization: the Mont-Blanc Transboundary Conference (CTMB), directed as well by 3 vice-presidents from the 3 countries. EMB has been using quite extensively European funds to implement its programs however its mission has been since its inception a bit of a moving target.
In parallel to EMB an umbrella organization called proMONT-BLANC, grouping 15 environmental associations came together to represent the civil society and was commissioned by its members to act in favor of a registration of Mont-Blanc to the UNESCO world’s heritage. This was also considered as an aggression.
Despite the initial antagonisms, the two groups have contributed to the development of the EMB driven management plan for the range which later became a Strategy for the Future of Mont-Blanc. Its development involved multiple committees working on issues such as access routes to Mont Blanc, accesses to shelters/huts of the massif, outdoor activities, biodiversity, energy transition, motorized flyovers etc… However, despite several Mountain Wilderness requests the major infrastructure developments projects never really came to the table for a discussion. Problems posed by the skyway Monte Bianco were raised many times including safety on glaciers, well ahead of its opening. No satisfactory response were ever produced even after a call to a meeting of all parties by the Haute-Savoie prefect. This situation led to the current dispute on the French/Italian borders.

To make the situation on these glaciers even more sensitive, the RAI (Public Italian TV) decided to produce a reality show, thus promoting the skyway, on the high altitude glaciers of Mont-Blanc, which the Italian environmental organizations violently reacted to. Mountain Wilderness Italy’s position is explained here

These current issues, which are essentially driven by economic reasons, are demonstrating that the present structure is not effective to manage all the aspects of the Mont-Blanc area in a respectful and ethical manner and it might be time again to pose the question:
Is a European Natural Park not a better answer?

Note: The above text is the sole view of the writer. It does not represent an official position of the Mountain Wilderness Organization.

Fungi and lichen patterns can also be indicators of global warming trends. Mushroom growth is believed to be linked to annual snowfall levels, and lichens are indicative of glacier melt. The Everest region is acutely vulnerable to climate change#Everest #glaciers #climatecrisis #snow #globalwarming ... See MoreSee Less

In shadow of giant mountains, they explore vital world of mushrooms

Travel barriers, and their costs, have thwarted scientific study in the Everest region, which makes mycologist Shiva Devkota's work all the more important.
View on Facebook
· Share

The United Nations is working to map glaciers in northern Pakistan to quantify the melting of ice caused by warming temperatures and set up early-warning systems to help the recently flood-hit nation adapt better to future climate risks ... See MoreSee Less

The United Nations is working to map glaciers in northern Pakistan to quantify the melting of ice caused by warming temperatures and set up early-warning systems to help the recently flood-hit nation ...
View on Facebook
· Share

Mountain Biodiversity 2002-2022: achievements and next challenges at global/regional level: Mountain Partnership "While we have already achieved a lot, we still have to ensure that #mountains receive the political attention - and funding - they deserve" Alpine Convention Ministero della Transizione Ecologica#MountainsMatter ... See MoreSee Less

Twenty young women aged between 15 and 25 took part in the basic course in eco-friendly mountaineering "Girls in Action!"This is one of the many courses Mountain Wilderness has held over time to train locals as guides and give them a livelihood, while protecting the environment, preserving mountains and respecting local culture and traditions.Many thanks to our partners ISMEO and Club Alpino Accademico Italiano as well as to Scarpa Spa for the 30 pairs of boots they donated and to Banca Sella and Mountain Partnership for their financial support! #empowerment #GirlsInAction #Swat #Pakistan #HKH #ecofriendly#mountaineering #wildlife #mountainsmatter #mountainlovers #climbing #cleanclimbing #leavenotrace #donoharm #nationalpark ... See MoreSee Less

Here is a brief report by Carlo Alberto Pinelli on the “Girls in Action!” course that was held in August. “The course to teach a group of Swat girls the basics of outdoors activities (combining ...
View on Facebook
· Share

Unprecedented heat waves that swept the planet this summer are melting snow and ice not just in Europe’s Alps but in the iconic Himalayan range, where the mountains shelter the largest reserve of frozen freshwater outside the North and South poles. Global warming is accelerating the loss of Himalayan glaciers much faster than scientists previously thought, destabilizing a fragile system that’s helped regulate the earth’s atmosphere and key water cycles for millennia. ... See MoreSee Less

Dissolving snow and ice in the iconic mountain range is contributing to floods in Pakistan, droughts in China and changes on Mount Everest.
View on Facebook
· Share

Fungi and lichen patterns can also be indicators of global warming trends. Mushroom growth is believed to be linked to annual snowfall levels, and lichens are indicative of glacier melt. The #Everest region is acutely vulnerable to #climatechange https://www.washingtonpost.com/health/2022/09/18/everest-mushroom-trek/

The United Nations is working to map #glaciers in northern #Pakistan to quantify the #melting of ice caused by #warming temperatures and set up early-warning systems to help the recently flood-hit nation adapt better to future #climate risks https://www.bloomberg.com/news/articles/2022-09-15/un-starts-world-s-biggest-glacier-mapping-plan-in-pakistan

Mountain Biodiversity 2002-2022: achievements and next challenges at global/regional level: @UNmountains "While we have already achieved a lot, we still have to ensure that #mountains receive the political attention - and funding - they deserve" @alpconv @MiTE_IT