A haven for wildlife and flora. 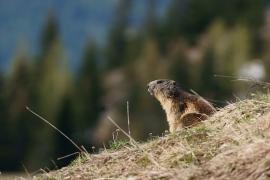 In the reserve, one can find typical mountainous plant and animal species, such as Alpine Ibex, Chamois, Rock Ptarmigan, Golden Eagle, Rhododendron, and heather. Multiple lakes are located within the nature reserve, including Lac Blanc, Lac Noir, Lac Cornu, and Lac du Brévent.

Eric Fournier, mayor of Chamonix highlighted that when the reserve was created in 1974, nobody was in its favour.

Under the leadership of Jean Eyheralde, pastor of Argentiere, a passionate naturalist, and Yvonne Gubler, geologist, it was originally intended to preserve the Col des Montets, which had become: a real dump.
Since then it it has become a little paradise and a very popular site even with the Chamonix valley inhabitants.
Managed by ASTERS, the Conservatory of Natural Areas of Haute-Savoie, this national reserve has an Advisory Committee in which Mountain Wilderness is represented.
It was the keystone to build the comprehensive nature preservation domain of the “South balcony of Mont Blanc” that we can enjoy today. The whole protection project was completed in 1991 and 1992 with the creation of two other natural reserves, the Carlaveyron National Nature Reserve, located at the bottom of the Diosaz canyon and the Bérard valley National Nature Reserve, whose landscaping are significantly contrasting with the famous ski areas of “La Flégère” and “Brévent” which which they surround.